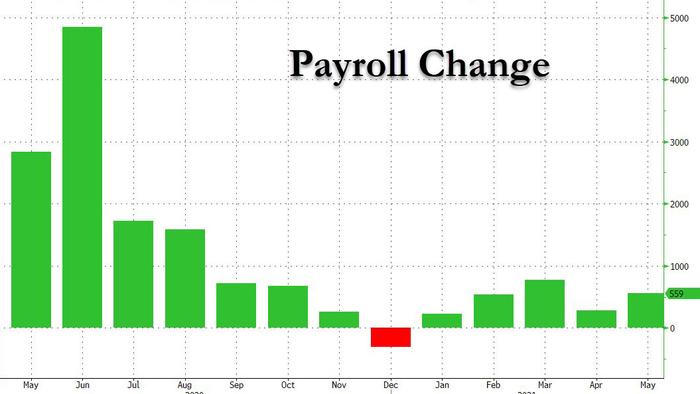 With so much of the recent labor market discourse focusing on widespread shortages resulting from Uncle Sam’s generous unemployment benefits (15 million people still collecting some form of weekly unemployment benefit), today’s jobs report which is expected to show a substantial rebound from April’s big miss, was set to be defining: another big miss and the shortage narrative would dominate for a long time, a big beat would meanwhile spark renewed reflation worries.

Well, it appears that “shortages” won out in the end because moments ago the BLS reported that in April just 559K jobs were added, which while a big improvement to April’s upward revised 278K…

… was another big miss compared to the 675K expectations.

While the miss was material, it was within the range of expectations, less than 1 SD compared to consensus, and far less pronounced than last month’s miss.

Nonfarm payroll employment is now down by 7.6 million, or 5.0%, from its pre-pandemic level in February 2020. Notable job gains occurred in leisure and hospitality, in public and private education, and in health care and social assistance in May.

The offset to the headline miss is that the unemployment rate dropped from 6.1% to 5.8%, coming below expectations of 5.9%, and reversing last month’s modest increase.

Among the major worker groups, the unemployment rates declined in May for teenagers (9.6 percent), Whites (5.1 percent), and Hispanics (7.3 percent). The jobless rates for adult men (5.9 percent), adult women (5.4 percent), Blacks (9.1 percent), and Asians (5.5
percent) showed little change in May.

The labor force participation rate also dropped to 61.6% in May from 61.8%, having remained within a narrow range of 61.4 percent to 61.7 percent since June 2020. The participation rate is 1.7% points lower than in February 2020. The employment-population ratio, at 58.0 percent, was also little changed in May but is up by 0.6 percentage point since December 2020. However, this measure is 3.1 percentage points below its February 2020 level.

The number of persons not in the labor force who currently want a job was essentially unchanged over the month at 6.6 million but is up by 1.6 million since February 2020. These individuals were not counted as unemployed because they were not actively looking for work during the last 4 weeks or were unavailable to take a job.

Among those not in the labor force who currently want a job, the number of persons marginally attached to the labor force, at 2.0 million, changed little in May but is up by 518,000 since February 2020. These individuals wanted and were available for work and had looked for a job sometime in the prior 12 months but had not looked for work in the 4 weeks preceding the survey. The number of discouraged workers, a subset of the marginally attached who believed that no jobs were available for them, was 600,000 in May, little changed from the previous month but 199,000 higher than in February 2020.

And another notable fact: in May, 7.9 million persons reported that they had been unable to work because their  employer closed or lost business due to the pandemic.

There was more good news on the wage front, where average hourly earnings rose from 0.4% to 2.0%, beating expectations of 1.6%.

A breakdown of jobs by sector:

Bottom line: a stronger jobs report, but still far below where it needs to be for the Fed to concede that the labor market is normalizing. And, of course, the paradox is that this is mostly due to the government’s generous handouts as CIBC economist Katherine Judge wrote:

“Our research suggests that generous unemployment benefit supplements have been the main factor holding employment gains back amidst record levels of job openings, but with many states moving to end the supplements in June, we expect millions of jobs to be added over the summer months.”

Commenting on the report, FX strategist Viraj Patel said that the “modest NFP gains of +559k will be a disappointment for Fed hawkish expectations. $USD weaker across the board as US rates drop. Likely that the wage inflation will be ignored due to distortions but a mixed bag overall with participation rate lower. Only +ve is U-6 rate down.”