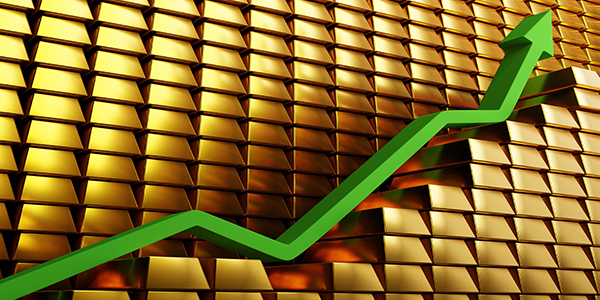 Please note: The Frank Talk articles listed below contain historical material. The data provided was current at the time of publication. For current information regarding any of the funds mentioned in these presentations, please visit the appropriate fund performance page. Gold notched its third straight week of higher prices as the yield on the 10-year Treasury dipped below 1.3% for the first time since February. The highly transmissible Delta variant was also ruled the most dominant strain of coronavirus in the U.S., threatening economic growth and raising uncertainty about the next interest rate hike.

Against this backdrop, the yellow metal is now flashing a golden cross, meaning the 50-day moving average is trading above the 200-day moving average. In the past, this has been a bullish indicator for gold prices, which are still off some 12% from their all-time highs set last summer. In the short to medium term, it appears as if gold demand will continue to be driven by central bank policy, which should remain accommodative even as inflation fears increase. According to the CME Group’s FedWatch Tool, there’s a 75% probability that interest rates will stay in the 0.00% to 0.25% range a year from now, leaving plenty of time for gold to test $2,000 an ounce or more.

Pandemic Still Tops Central Bankers’ List of Worries, with Inflation Not Too Far Behind

Speaking of central banks, UBS released the results of its annual reserve management survey last week, which show that managers are still very much concerned with the handling of the pandemic.

Nearly 80% of respondents cited failure to end the pandemic as their number one concern impacting the global economy right now, with more than half of them saying they believed it would be over only after 2022. Here in the U.S., the rate of vaccination has slowed considerably in certain populations, allowing Canada, the United Kingdom, Italy and Germany to catch up. In low-income countries, meanwhile, only 1% of people have received one dose of the vaccine.

Central bankers’ concern is not unfounded. IHS Markit’s chief business economist published an article last week showing there’s a strong correlation between vaccination rates and economic growth. The higher a country’s vax rate, the higher its PMI reading was in June; the reverse was also true. Rounding out the top three concerns impacting future growth were government debt levels (71% of respondents), something I’ve written a lot about, and inflation (57%). I should point out that inflation did not even appear on the list of concerns one year ago when the last survey was taken. The London Bullion Market Association (LBMA) also notes, in its review of the second quarter, that there were more than 100,000 press articles published about inflation in May, far more than on COVID-19.

All of these concerns, I believe, favor gold as a portfolio diversifier. Low bond yields have pushed investors into riskier assets, including stocks. This has been a winning strategy as major indices have been hitting all-time highs, but it’s important to maintain a position in gold to help manage risk. I recommend a 10% weighting, with 5% in physical gold and 5% in gold stocks. A 1% to 2% allocation in Bitcoin and Ether, not to mention crypto mining stocks, also makes sense right now.

As many of you are aware, HIVE Blockchain Technologies, the world’s first publicly traded cryptocurrency mining company, listed on the tech-heavy Nasdaq on July 1, four years after its debut on the TSX Venture Exchange.

I was very happy last week to see HIVE featured on Nasdaq’s Times Square marquee, which reaches 1,000,000 a day.

I’m also grateful that HIVE team members and I have the opportunity today to participate in the closing bell ceremony at Nasdaq. We’re only getting started!

All opinions expressed and data provided are subject to change without notice. Some of these opinions may not be appropriate to every investor. By clicking the link(s) above, you will be directed to a third-party website(s). U.S. Global Investors does not endorse all information supplied by this/these website(s) and is not responsible for its/their content.

The Purchasing Manager’s Index is an indicator of the economic health of the manufacturing sector. The PMI index is based on five major indicators: new orders, inventory levels, production, supplier deliveries and the employment environment.