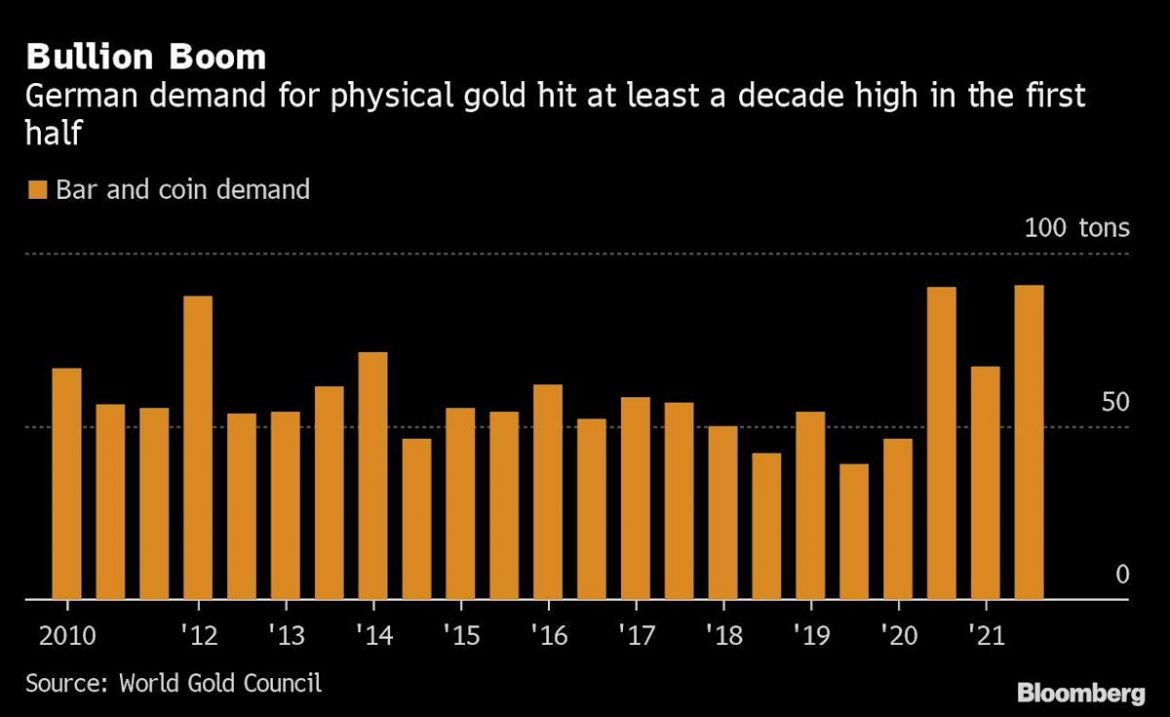 Many gold investors might be fretting over the prospect of the Federal Reserve curbing monetary stimulus, but Germans are still loading up.

Demand for physical bullion in Germany, traditionally the biggest coin and bar buyer in Europe, was the highest since at least 2009 in the first half, World Gold Council data show. While purchases in other Western markets have also been strong, Germans in particular are pouring into the metal as a hedge against rising inflation — and dealers say business remains good.

“We have a long history of inflation fear in our DNA. Now the inflation risk is picking up,” said Raphael Scherer, a managing director at metals dealer Philoro Edelmetalle GmbH, whose gold sales are up 25% on what was already a strong 2020. “The outlook for precious metals is very positive.”

Germany’s love of gold has it origins in the hyperinflation seen under the Weimar Republic a century ago, which saw consumers’ buying power collapse. Last month, the reopening of the economy helped German inflation jump to the highest in more than a decade. Negative interest rates in Europe are also making non-yielding assets like gold more attractive, Scherer said.

First-half demand for bar and coins in Germany increased by 35% from the previous six months, compared with 20% in the rest of the world, WGC data show.

Still, gold prices have fallen almost 7% since early June as the market braces for the Fed to curb its massive stimulus measures that helped send the metal to a record high in 2020. Traders will closely watch the central bank’s gathering Jackson Hole this week for clues on the timing of tapering.

On the other side of the Atlantic, expectations for a rate hike by the European Central Bank in the coming years remains muted. That may support demand for gold in Germany, even if global prices ease.

Subscribe now to stay ahead with the most trusted business news source.