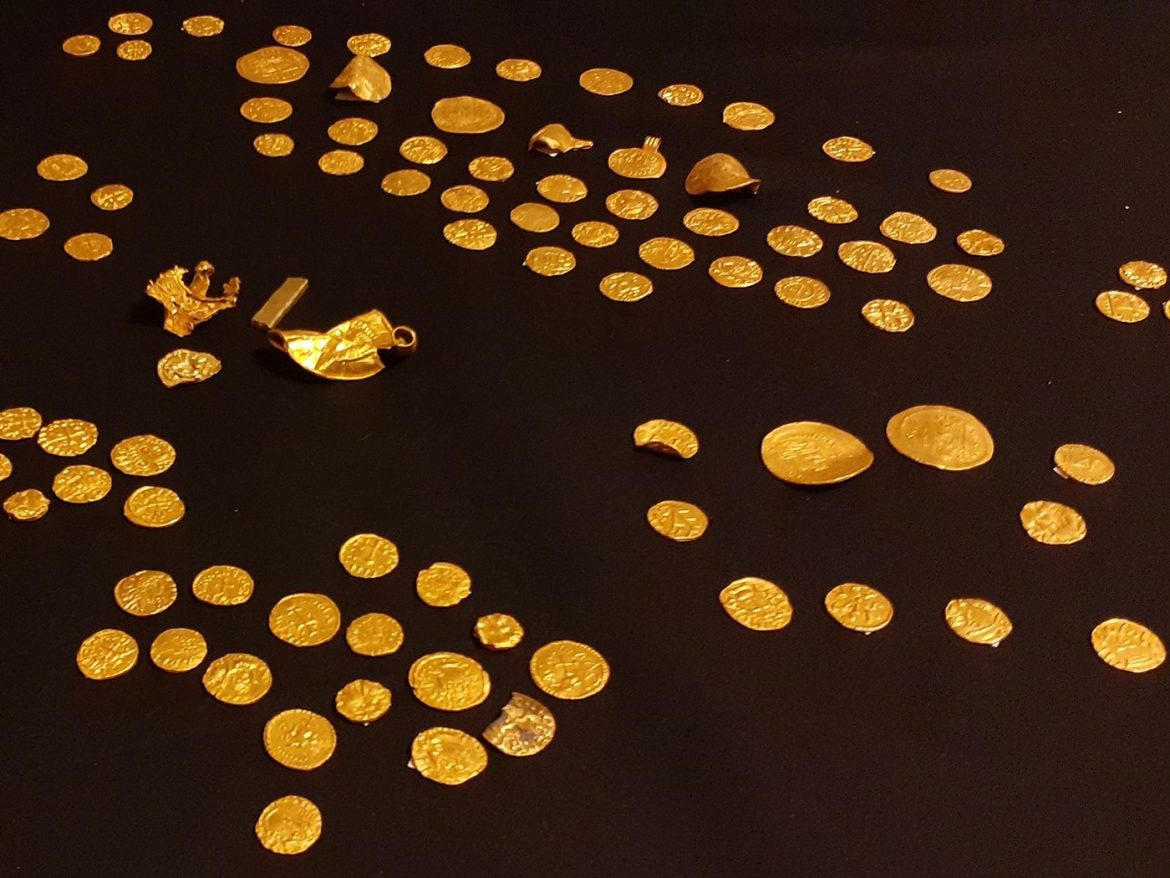 A hoard of early medieval gold coins discovered by two people with metal detectors is the largest of its kind ever found in England, reports Nadia Khomami for the Guardian.

Buried in what is now West Norfolk around 600 C.E., the trove of 131 coins and 4 gold objects is larger than a cache famously found at Sutton Hoo in 1939. (Earlier this year, the Netflix movie The Dig drew renewed attention to the excavation, which unearthed a purse containing 37 gold coins, 3 blank gold discs and 2 gold ingots, among other rare artifacts.) The region where both hoards were found—now eastern England—was once part of the Kingdom of East Anglia.

“This is a hugely important find. It is close in date to the famous ship burial from Sutton Hoo in Suffolk, and although it doesn’t contain as much gold as the whole of the Sutton Hoo burial, it contains many more coins,” says Gareth Williams, curator of early medieval coins at the British Museum, in a statement. “In fact, it is the largest coin hoard of the period known to date.”

Prior to the newly publicized cache’s discovery, the largest known coin hoard from the early medieval era (around 410 to 1066 C.E.) was a purse with 101 coins found at Crondall in Hampshire in 1828. According to Michel Shutterly of CoinWeek, the so-called Crondall Hoard was either lost or hidden between 635 and 650. The majority of the coins were gold pieces known as thrymsas. A separate hoard found in Staffordshire in 2009 constitutes the largest trove of precious metal from the period, but it contains no coins.

An anonymous individual found most of the West Norfolk coins in a single field between 2014 and 2020, reports Sam Russell for the Evening Standard. Separately, a local police officer searching that same area with a metal detector discovered ten coins but did not report his find to authorities as required by law. Found guilty of deception, he was sentenced to 16 months in prison and dismissed from the police force in 2017.

“The West Norfolk hoard is a really remarkable find, which will provide a fascinating counterpart to Sutton Hoo at the other end of the kingdom of East Anglia,” says Helen Geake, Norkolk finds liaison officer, in the statement. “It underlines the value of metal-detected evidence in helping reconstruct the earliest history of England.”

According to the statement, most of the coins are Frankish tremisses, a small gold coin minted in what is now France during the Late Antiquity period (around 284 to 700 C.E.). The cache also contains nine gold solidi, a larger coin from the Byzantine Empire worth about three tremisses.

In addition to the coins, the treasure hunter discovered a number of gold objects: a bracteate, or stamped pendant; a small bar; and two other fragments that probably belonged to larger pieces of jewelry. The presence of these items suggests that the coins’ onetime owner used them as bullion, valuing them for their weight in gold rather than their face value as currency.

The Norfolk coroner is currently conducting an inquest to determine if the hoard qualifies as treasure, reports Tessa Solomon for ARTnews. Under the 1996 Treasure Act, finds made by the public are only designated as treasure if they’re more than 300 years old, made of gold or silver, or found alongside artifacts containing precious materials. Once declared treasure, artifacts become the property of the state and are turned over to authorities for display at national or local museums.

The Norwich Castle Museum and Art Gallery is interested in acquiring the Norfolk hoard with the support of the British Museum, ARTnews notes.

Last year, the United Kingdom’s government announced plans to revisit its narrow legal definition of treasure. As Caroline Davies wrote for the Guardian at the time, rare objects that fall outside of this definition are often sold to private collectors, preventing the public from viewing and studying national heritage items.

“This internationally significant find reflects the wealth and continental connections enjoyed by the early Kingdom of East Anglia,” says Tim Pestell, senior curator at the Norwich Castle Museum and Art Gallery, in the statement. “Study of the hoard and its findspot has the potential to unlock our understanding of early trade and exchange systems and the importance of West Norfolk to East Anglia’s ruling kings in the seventh century.”