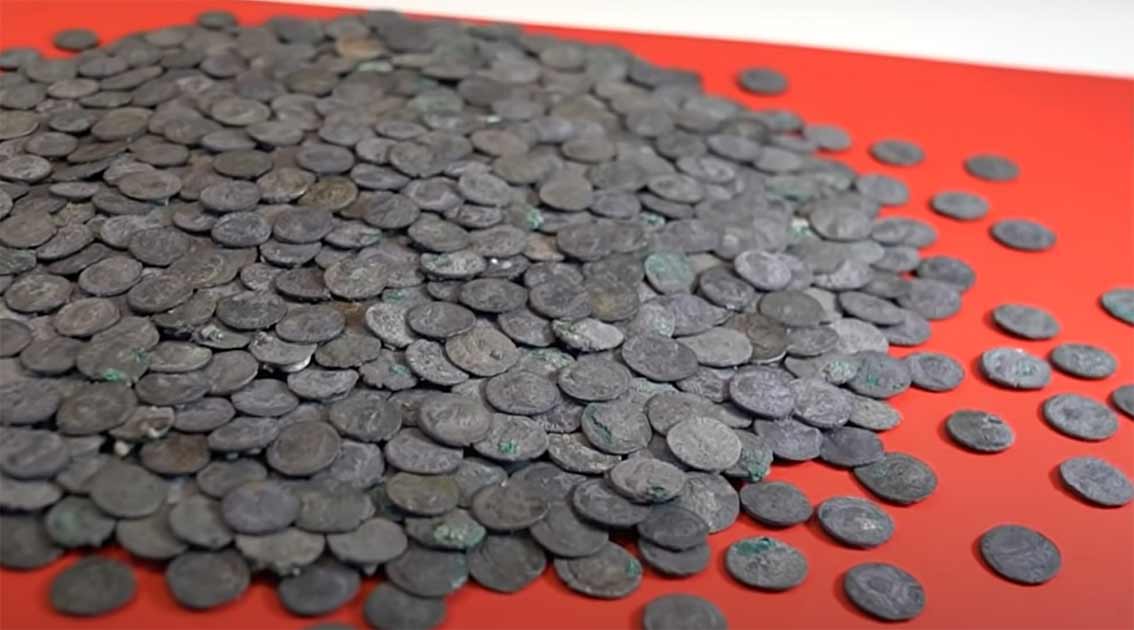 A massive stash of Roman silver dating to the first and second centuries AD has been discovered in the Bavarian city of Augsburg in Germany. The cache, which includes 15 kg (33 pounds) of silver coins, is the largest single ancient Roman silver hoard find in Bavaria. The treasure was discovered by archaeologists digging at a planned housing site in the Oberhausen district, the oldest part of the city, prior to builders starting construction work.

A closeup of a few of the Roman silver hoard coins found at the construction site in Augsburg, Bavaria, Germany. (YouTube screenshot / tagesshau)

Along with the roughly 5600 silver coins , the Augsburg silver hoard includes weapons, tools, utensils and jewelry, making it the most important such find in the Bavarian region. Arkeonews quotes Stefan Krmnicek from the Institute for Classical Archaeology at the University of Tübingen as saying,

“This amount of money must have been enormous by ancient standards. It is certainly not owned by someone who belonged to the lower social pyramid. This [sic.] is most likely to think of people who were active in the military or in trade .”

“A simple soldier earned between 375 and 500 denarii in the early 3rd century. The treasure therefore has the equivalent of around 11 to 15 annual salaries.” He adds, “What makes this treasure particularly important is that it is dinars dating back to the first and second centuries AD, and they still contain a very large amount of silver, and weapons, tools, jewelry.”

Interestingly, the hoard also includes coins from the reign of Emperor Didius Julianus, who was on the throne for only 90 days (March-June 193 AD) after buying it from the Praetorian Guard , which had assassinated his predecessor Pertinax. Since he ruled for such a short period, coins issued in his reign are quite rare.

Septimius Severus , the last emperor represented in the coin hoard, wrested the throne from Julianus after routing cohorts of the Praetorian Guard sent out by Julianus to meet him as he marched on the capital from Pannonia where he commanded a Roman legion . 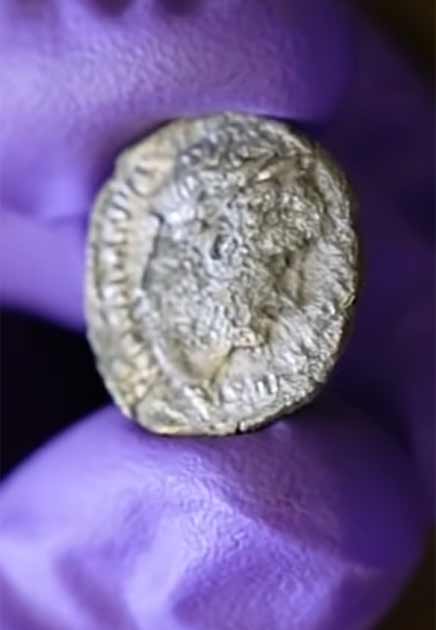 This coin from the Augsburg silver hoard has an image of a Roman emperor on it that is pretty clear. (YouTube screenshot / tagesshau)

Augsburg was founded by Emperor Augustus between 8 and 5 BC, making it Germany’s oldest city after Trier. And a magnificent bronze statue of Emperor Augustus is one of the city’s most popular monuments today.

The city first began as a Roman military camp on the banks of the Wertach River near its confluence with the Lech River. Augsburg was the first Roman camp established in the Alpine foothills in Germany, which had been conquered in around 15 BC by Augustus’s stepson Tiberius.

Around AD 10 this temporary military camp grew into a permanent fort with a 3000-soldier capacity. The civilian settlement outside the camp soon expanded into the town of Augusta Vindelicorum, which became the capital of the new Roman province of Raetia under Tiberius. After 70 AD, although the town stopped being a military station, it continued to flourish independently.

By the end of the third century AD, after reforms in the administration initiated by Emperor Diocletian , Raetia came under the governance of a dux, the top military authority in the region. However, Augusta Vindelicorum remained the headquarters of government officials lower down in the hierarchy, who carried out routine civilian administration of the province from there. 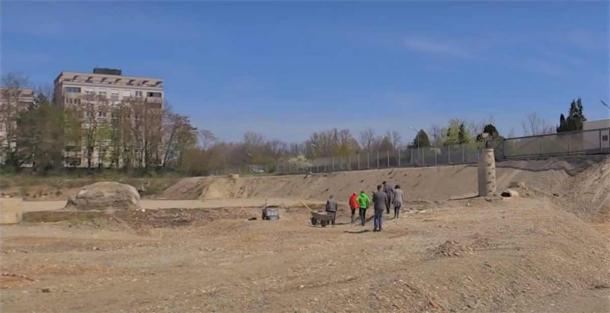 The Augsburg construction site where the silver hoard was found scattered across a wide area. (YouTube screenshot / tagesshau)

The silver coins and other artifacts were discovered separately scattered in a construction trench near Oberhausen, the city’s core, as well as in the gravel of an old Wertach riverbed (the river’s course was changed in 1900). Experts have assumed that the treasure was buried outside the city of Augusta Vindelicum near the Via Claudia in the early 3rd century AD and never recovered until now.

“The hiding place was probably washed away many centuries later by floods in Wertach and the coins were thus scattered in the river gravel,” said Sebastian Gairhos. Along with the coins, a vast quantity of other Roman artifacts like weapons, tools, jewelry and vessels were found when archaeologists sifted through 100 cubic meters (3531 cubic feet) of river gravel.

These artifacts were badly corroded from their long sojourn in the river water and will now undergo an extensive process of cleaning and conservation.

Those eager see the silver hoard and the other artifacts can catch a glimpse of the fascinating treasure at the Armory House of Augsburg from December 17, 2021, to January 9, 2022. After cleaning and conservation work has been completed the entire hoard will likely become part of the museum’s permanent collection.