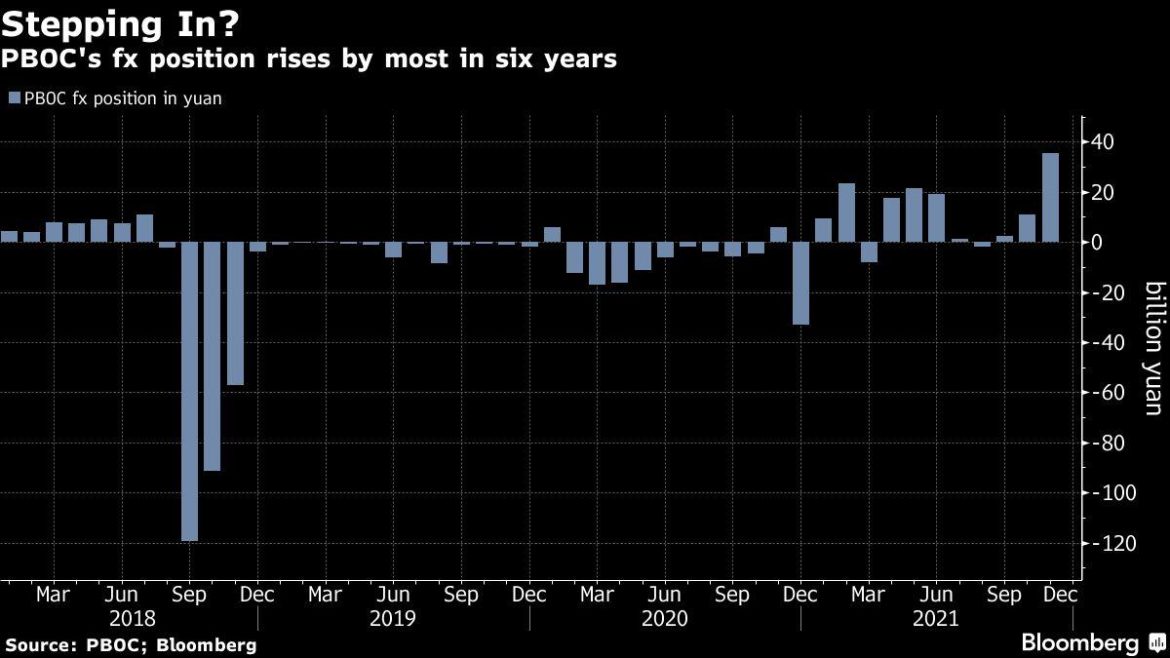 (Bloomberg) — The People’s Bank of China could bolster liquidity in the banking system by selling yuan, which will help lower borrowing costs while stemming the currency’s gains, Nomura Inc. said.

There are signs that the PBOC may already be acting, with its foreign exchange pile showing the biggest monthly gain in November since 2015 as the yuan climbed to a six-year high against a basket of peers. There are also growing investor expectations for China to further ease policy as a crackdown on the property industry and slowing consumer spending weighs on the economy.

“We expect the net purchases of FX by the PBOC could increase significantly in the coming months,” Lu wrote in a Monday note. “First, it could prevent the yuan from appreciating further. Second, it could raise the PBOC’s FX reserves in a time of rising market fear of Chinese corporates’ offshore dollar bonds defaults. Third, it could add liquidity to the economy, which is slowing to a worrisome pace.”

Foreign exchange reserves held at the PBOC jumped by 35.4 billion yuan ($5.6 billion) in November — that’s more than what it added cumulatively in the past five months and the most since Oct. 2015.

Still, as exports boomed and global funds piled into sovereign bonds, the currency hit a three-year high against the dollar this month. Policy makers have also pivoted toward a pro-growth strategy, cutting the required reserve ratio. On Monday, Chinese banks lowered borrowing costs for the first time in 20 months, with the one-year loan prime rate set at 3.8% versus 3.85% in November.

Chinese banks are holding near-record foreign exchange deposits, which means the PBOC could sell them yuan in the foreign exchange market — a move it previously utilized to offset hot money flows.