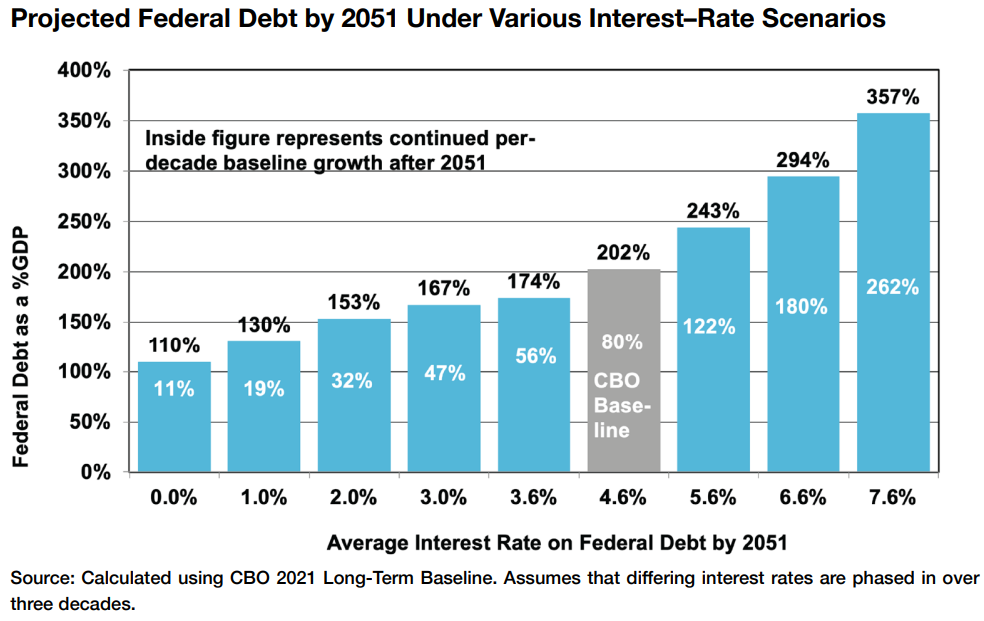 The world has changed, Treasury Secretary Janet Yellen told Congress early this year. She wasn’t talking about Covid, though. She was arguing that an era of persistently low interest rates meant that the United States could afford to carry more debt — and to spend as needed to address the pandemic and make long-term investments to grow the economy. “In a very low interest-rate environment like we’re in, what we’re seeing is that even though the amount of debt relative to the economy has gone up, the interest burden hasn’t,” Yellen said.

As we end the year, the debate over that line of thought, which has emerged as the conventional wisdom underpinning much of liberal economic policymaking, is still going on, with fiscal hawks warning that increases in interest rates could still lead to a debt crisis and conservatives pushing back against the prospect of deficit-financed government expansion.

The latest such argument against downplaying debt fears comes from Brian Riedl, a senior fellow and veteran budget expert at the conservative Manhattan Institute. In a new 32-page report, Riedl warns that the newly popular line of economic thinking “has two fatal flaws”:

“First, it fails to acknowledge that over the next few decades—even without new legislation—the debt is already projected to reach levels that even debt doves would likely consider unsustainable. Second, this argument assumes that interest rates will forever remain near today’s low levels, thus minimizing Washington’s cost of servicing this debt.”

Riedl argues that the government is already projected to run baseline deficits totaling $112 trillion over the next three decades, with annual deficits rising to more than 13% of the economy and the national debt growing to more than 200% of GDP. Interest payments at that point would eat up almost half of all tax revenues. “In short,” Riedl writes, “the baseline debt is already projected to grow to unsustainable levels even before any new proposals are enacted.”

If interest rates rise, the fiscal outlook would be even worse. The Congressional Budget Office projects that the average interest rate on the federal debt will rise from 2.4% in 2019 to 4.6% by 2051. Riedl writes that economic forecasters have been “disastrously wrong” in their predictions — though in recent decades, they’ve mostly overestimated where interest rates would be. Still, he says, it’s dangerous to assume that rates will stay low forever, and some of the factors that have kept them this low for this long could reverse themselves: “Indeed, several realistic economic scenarios could easily push interest rates back up to 4%–5% within a few decades—which would coincide with a projected debt surge to greatly increase federal budget interest costs.”

Even if rates only rise in keeping with CBO’s projections, interest costs on the debt would grow to 8.6% of GDP by 2015, becoming the largest expenditure in the federal budget. And the risk from rates rising even higher would be severe, as government interest costs would climb by $30 trillion over 30 years for every percentage point rates rise above the CBO forecast. “In short, once the debt surges, even modest interest- rate movements can impose stratospheric costs,” Riedl warns.

The bottom line: “The big takeaway,” Riedl writes in an email, “is that lawmakers should not gamble the long-term economy on the hope that interest rates never exceed 4% or 5% again. Because there is no backup plan if they’re wrong.”