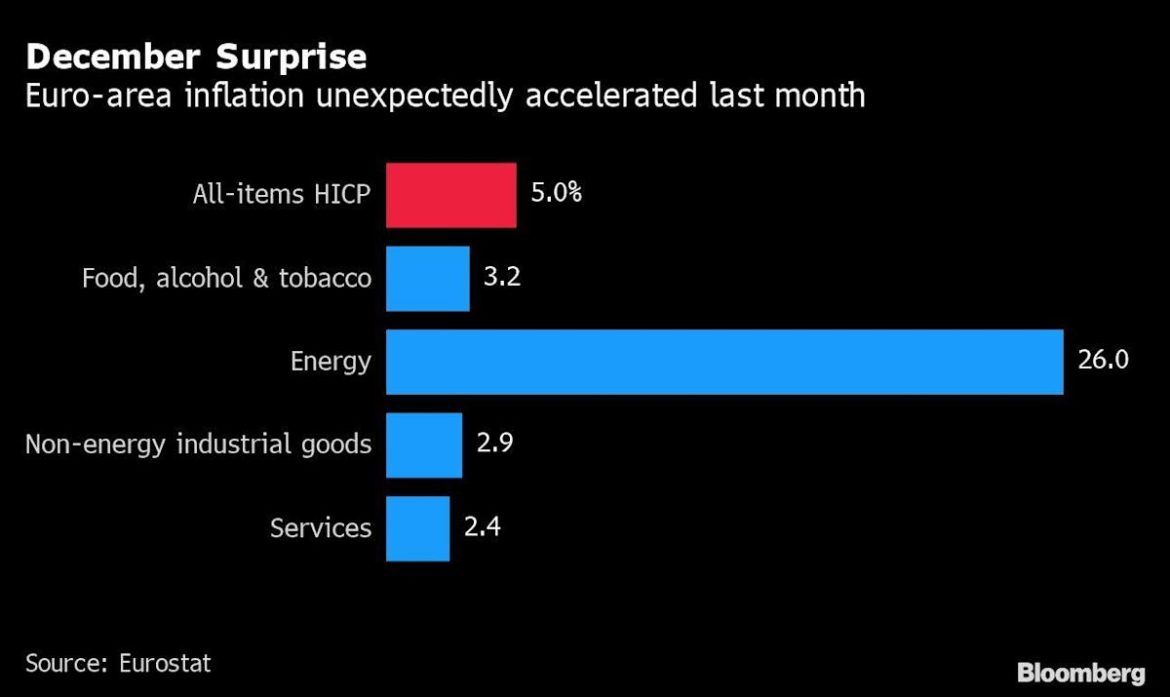 Inflation in the euro region accelerated beyond already record levels, defying expectations for a slowdown and complicating the task for European Central Bank officials who insist the current spike is temporary. The euro strengthened.

Consumer prices jumped 5% from a year earlier in December — faster than the previous month’s 4.9% gain and more than the 4.8% median estimate in a Bloomberg survey of economists. A measure that strips out volatile components such as food and energy came in at 2.6%, matching November’s reading.

Economic confidence in the euro area, meanwhile, slipped by more than analysts forecast amid the emergence of the coronavirus’s highly contagious omicron variant.

Friday’s inflation data increases the pressure on the ECB after supply-chain disruptions and soaring energy costs drove price growth to its fastest since the common currency was created.

While the Frankfurt-based institution has mapped out a retreat from crisis-era stimulus measures, more aggressive monetary-policy tightening by other major central banks has prompted some officials to urge a tougher stance.

President Christine Lagarde said last month that inflation is likely to remain elevated in the near term before slowing in 2022 to settle below the 2% target. She’s said a rate hike wouldn’t be the correct response to the current bout of price growth, partly because its effects would only be felt later on, when pressures would already be easing.

That hasn’t stopped money markets betting on a rate rise later this year. The euro climbed 0.1% against the dollar on Friday to $1.1304.

Despite December’s acceleration, many see euro-area inflation probably now at or near its peak. Bank of France Governor Francois Villeroy de Galhau said as much this week after data indicated consumer prices in the currency bloc’s second-largest economy stabilized in December.

“Despite a bumpy road ahead, the big picture is for inflation to end over the coming months the positive trend started last year,” Nicola Nobile, chief Italian economist at Oxford Economics, said in an emailed report to clients. “Thanks to the easing of energy pressures and of supply bottlenecks, we forecast inflation to decrease to 3.9% in the first quarter and to average 2.6% in the whole of 2022.”

Omicron is also muddying the outlook, with analysts unclear on whether the disruption it causes will stoke inflation or have the opposite effect by curbing the economic recovery.

Friday’s sentiment report from the European Commission showed heightened fears of the pandemic hurting confidence among consumers and the retail and services sectors.

The uncertainty has led ECB officials to urge flexibility in their approach to inflation. Governing Council member Martins Kazaks said this week in an interview that policy makers will act if the outlook for prices picks up.

(Updates with economist in 10th paragraph.)

Subscribe now to stay ahead with the most trusted business news source.