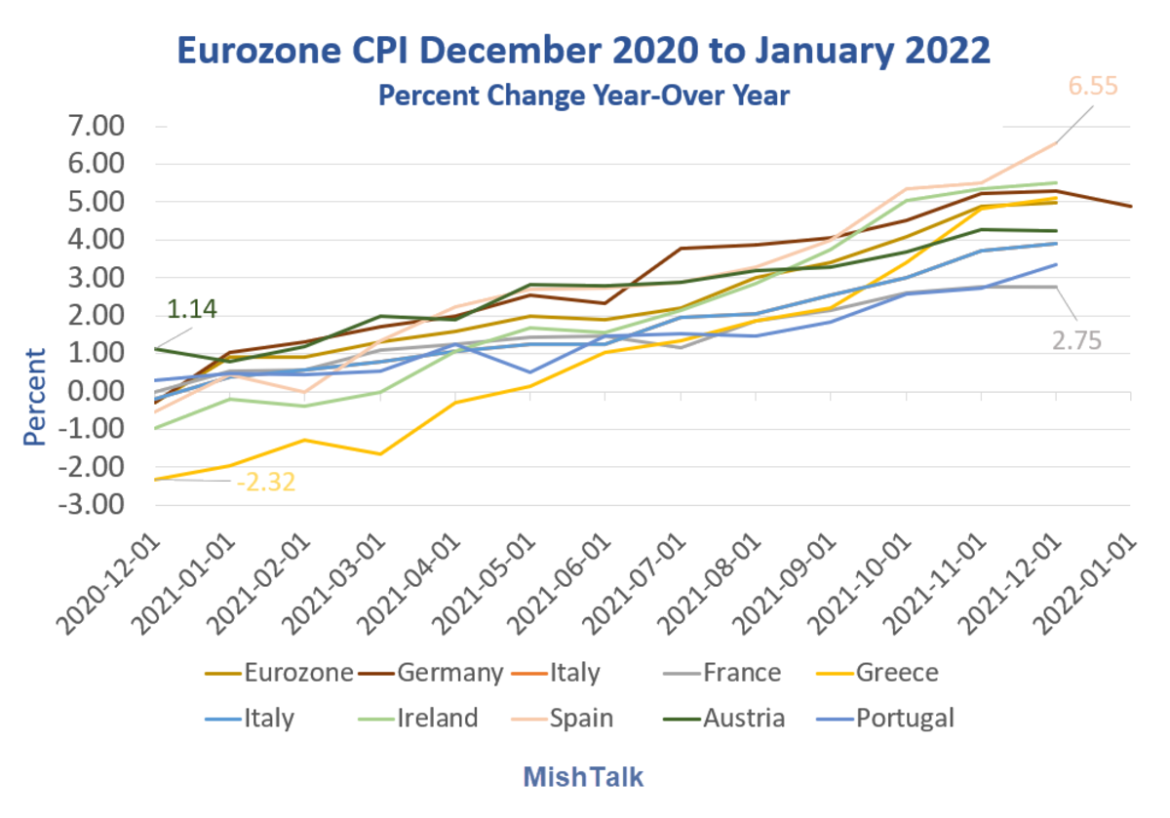 Given widely differing economies and rates of inflation it is impossible for the ECB to set an interest rates that serves every country that has adopted the Euro as its currency.

The ECB punishes banks and savers alike with Interest rates current at -0.50 percent.

The ECB thought this would stimulate lending, but it didn’t and won’t.

At a certain point, reducing interest rates does not stimulate growth. It’s not possible to know that point, but it for certain it is above zero. Thus the ECB’s rate setting policy is a guaranteed loser.

For discussion of the ELB, please see In Search of the Effective Lower Bound

Negative interest rate cannot happen with central bank interventions. Negative rates imply things like it is better to have 99 cents ten years from now than a dollar today.

That is logically impossible, yet here we are.

Whereas the Fed paid interest (free money) on QE deposits crammed down banks’ throats, the ECB charged banks interest on QE crammed down their throats.

The Fed slowly recapitalized banks with free money but the ECB made banks’ lives more difficult.

As Long as It Takes

“As Long As It Takes”

On the day the ECB announced the alleged stimulus, I commented ECB’s Counterproductive QE: Whatever It Takes Morphs Into “As Long As It Takes”

It seems the ECB does not have a basic understanding of bank lending requirements.

The Target 2 Payment System is another fundamental flaw of the Eurozone.  Here is the latest Target 2 Report.

Target 2 is a real-time gross settlement system. It represents county-to-country claims and liabilities owed by one country to another.

It is also a measure of capital flight. For example, if Greek citizens do not trust Greek banks, they may prefer to keep deposits in Germany.

The ECB says a euro is a euro, but if Italy, Greece, or Spain were ever to leave the Eurozone, we would instantaneously see the flaw in the system.

The ECB has its own Target 2 imbalance as a result of its QE program.

In theory, all of this debt is treated equal and can never be defaulted on. In practice, an economic crisis like that in Greece and Cyprus proves otherwise.

These two imbalances led to an Enormous Property Bubbles in Spain

Spain may very well be back in another housing bubble and it tops the list at 6.55% inflation as of December 2021.

Meanwhile, Germany will do anything to keep exports flowing to both peripheral Europe, Russia, and China.

The fundamental flaws of the Eurozone have not been fixed and there is roughly a zero chance they can be fixed.

To comingle debt, Germany would need to change its constitution and it would take a rules change in every country to agree to do so.

Every country, not just Germany would have to agree to these changes and that is the third fundamental flaw in the Eurozone.

It’s been 14 years since the last crisis, but nothing has been fixed in the Eurozone or the US. The US has enormous fiscal deficits with no end in sight.

What’s Propping Up the US Dollar?

People often ask me “what is propping up the US dollar?”

Those asking the question do not understand what’s going on in Europe, Japan, or China.

All the fiat currencies are flawed.

There is competitive currency debasement by every central bank with negative interest rates in Europe and Japan, and an imploding property bubble in China.

There is one currency I do like: Got gold?

Thanks for Tuning In!

Subscribers get an email alert of each post as they happen. Read the ones you like and you can unsubscribe at any time.

If you have subscribed and do not get email alerts, please check your spam folder.