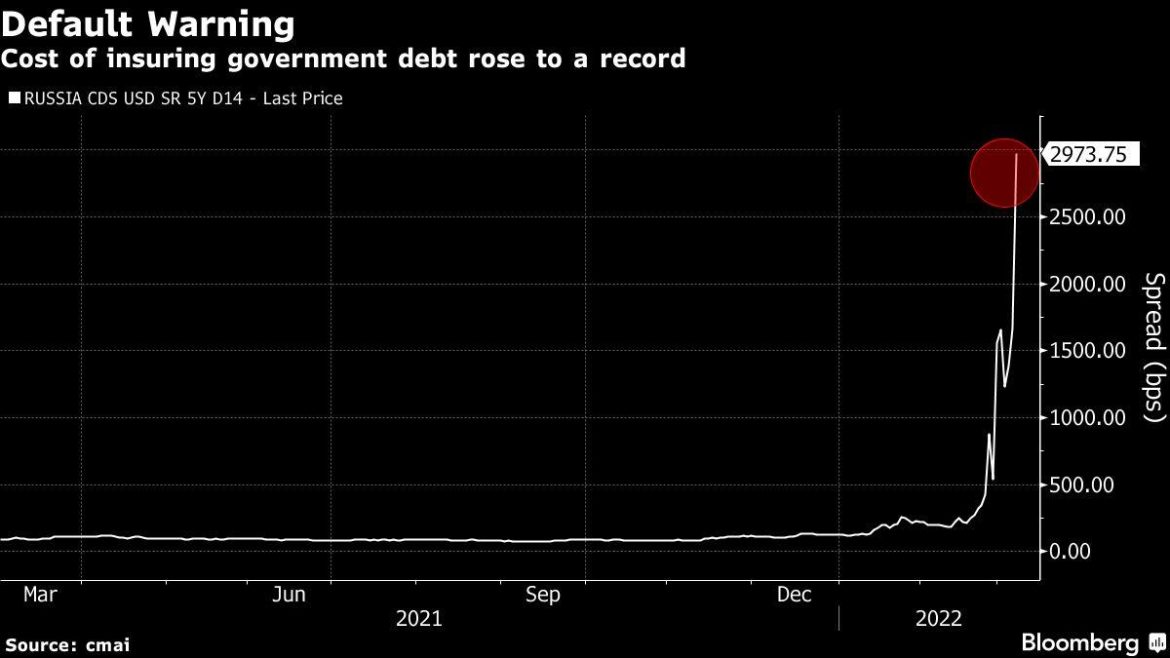 (Bloomberg) — The cost of insuring Russia’s government debt rose to a record high after President Vladimir Putin signed a decree allowing it to repay foreign creditors in rubles, raising concerns about the prospects of a default across the country’s $33 billion of dollar bonds.

Credit-default swaps insuring $10 million of the country’s notes for five years were quoted at about $5.8 million upfront and $100,000 annually on Monday, signaling around 80% likelihood of default, according to ICE Data Services. ICE is the main clearing house for European CDS. The upfront cost that protection sellers demanded on Monday rose from around $4 million last week.

The decree announced over the weekend said that repayment in rubles could include securities denominated in other currencies. While some of Russia’s international bonds allow repayments in rubles, the two dollar bonds with $117 million worth of coupons due on March 16 don’t have that option. Investors are concerned that Russia could trigger default swaps if it decides to repay those bonds in rubles.

“The CDS has blown out wider after Putin’s declaration that some debts will be paid in RUB despite being denominated in USD,” said Anthony Kettle, a senior portfolio manager at BlueBay Asset Management. “It’s still unclear, but that could be an event of default for the March 16 coupon.”

Six of the government’s dollar and euro bonds allow the issuer to service its debts in other currencies, including the ruble, JPMorgan Chase & Co. strategists led by Trang Nguyen wrote in a note to investors last week. The option of paying even those securities back in rubles could put them “out of scope for CDS as ‘obligations’ and ‘deliverable obligations,’” they said.

Kettle at BlueBay agreed. “Even for those with fallback, it’s not deliverable via the CDS,” he said. “It sounds like they may try and pay for now, but unclear if all payments will get to the end holder.”

Traders were already concerned that the contracts insuring $41 billion of Russian sovereign debt could be rendered worthless by international sanctions. Still, they’ve been rushing to buy protection on Russia’s sovereign debt as the country becomes an almost uninvestable market for global investors.

(Updates to add comments from BlueBay.)