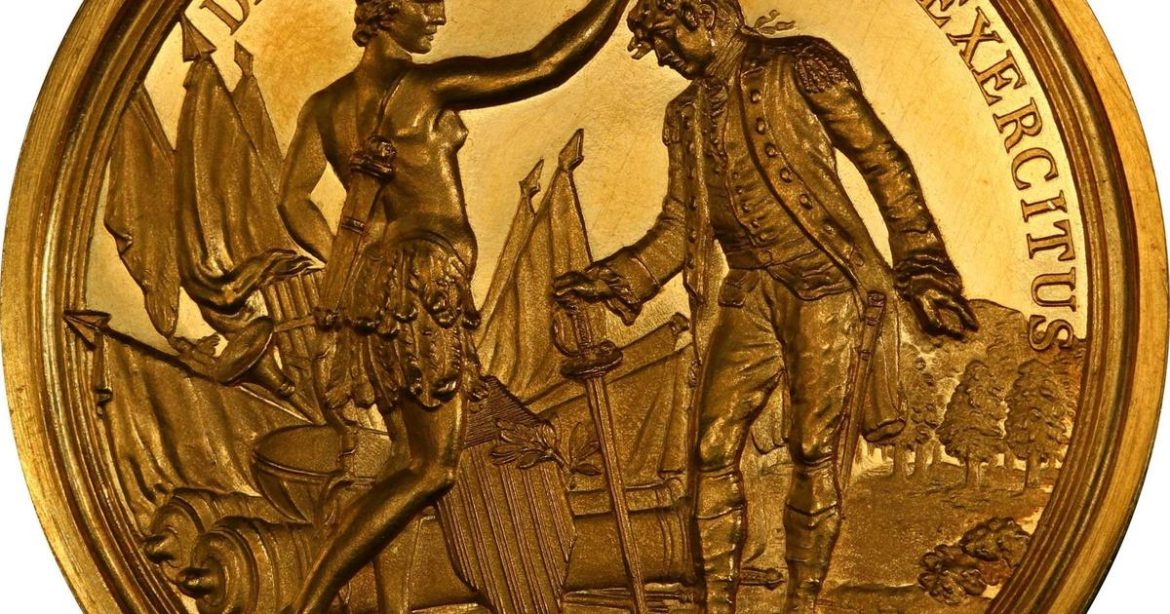 When numismatist John Kraljevich of Fort Mill, South Carolina opened a box containing a unique solid gold medal that an auction house asked him to authenticate, his jaw dropped.

“My reaction was somewhere along the lines of, holy (expletive),” Kraljevich said. “As soon as I laid my eyes on it, I knew what it was.”

Indeed, it was the original and only gold Daniel Morgan at Cowpens Medal struck by the Philadelphia Mint in 1839.

Untraced since 1885, an anonymous owner consigned the medal to be auctioned off at Stack’s Bowers Galleries April 4-8 in Costa Mesa, California.

“Struck in impressive relief and superlative detail, this medal is the finest medallic effort of its age and, perhaps, any other,” Stack’s Bowers Galleries wrote of the one-of-a-kind medal.

Kraljevich, a dealer who specializes in rare, early medals, has been authenticating coins and medals for two decades.

“Its appearance represents the most shocking and important discovery in American numismatics in years,” he said.

He was familiar with the mystery behind the medal that was minted for Revolutionary War General Daniel Morgan, and knew that over time, many replicas and copies of medals have been minted.

In the mid-1970s, for example, newspapers reported that a metal detector from Greer found what he believed was the Morgan medal 15 inches underground. The finder said he sent the medal to the Smithsonian Institute for identification, according to reports.

But Kraljevich said he couldn’t find any subsequent records to validate the story.

“In our business, we see local newspapers publish very credulous articles from metal detectors who claim to have found something wonderful,” he said. “Typically (the reports) are a red herring and typically never seen again.

“There are a lot of reasons for replicas (of the Morgan medal) to be found here, but not the original. There is no shred of evidence that the original was ever in the state of South Carolina.”

Kraljevich said the original 1840 case and solid gold Daniel Morgan at Cowpens Medal that was sent to his office from the auction house were in immaculate condition, with the medal grading 63 SP (Specimen) on a scale of 60 to 70.

When it comes to value, he said there’s no telling how much a medal this rare might fetch at auction.

“This piece (the Morgan medal) is in much better condition,” Kraljevich said. “This medal is famous because of the exquisite artistry, its rarity, condition and a great story. If it brought a similar amount ($600,000), I would be very pleased.”

About the Daniel Morgan medal

As a consultant, Kraljevich also provided the history of the medal to Stack’s Bowers Galleries for publication of its Spring 2022 Auction catalog.

The medal was initially authorized in March 1781 by the Continental Congress to recognize the valor shown by Gen. Daniel Morgan at the January 1781 Battle of Cowpens.

The Continental Army won the Jan. 17, 1781, battle, which coupled with the British defeat at the Battle of Kings Mountain led to the eventual defeat of the British at the siege of Yorktown in October 1781.

According to the Fred W. Smith National Library for the Study of George Washington, Gen. Daniel Morgan served alongside and under several famous officers, including George Washington, Benedict Arnold, Horatio Gates and Nathaniel Greene.

Morgan was born in 1735 and was an officer of the Virginia militia at the start of the Revolutionary War. He resigned from the army in 1779, then returned to service after a British victory at the Aug. 16, 1780, Battle of Camden to lead the Continental Army to victory at Cowpens. He later served in the U.S. House of Representatives, retired in 1799, and died in 1802.

A monument to Morgan stands at Morgan Square in downtown Spartanburg.

The medal was designed by Augustin Dupre, a legendary French master medallic artist, and was part of the Comitia American series of 133 medals created between 1776 and the early 19th century that memorialized pivotal moments of the American Revolutionary War.

The front of the medal depicts Morgan leading an infantry charge on horseback against a retreating British cavalry.

The back features a Native American female placing a crown of laurels on the head of Morgan who bows in uniform to her right to receive his crown. Behind them are two cannons, a shield, trumpet and fasces to represent war.

The medal was struck in Paris in 1789 and presented in 1790 to Morgan, who was then living near the frontier town of Winchester, Virginia.

After Morgan’s death, the medal was owned by his grandson and heir Morgan Neville. Stored in a bank vault in Pittsburgh, it was stolen in 1818 during a robbery.

“The thieves were eventually identified the next day and jailed at Neville (a coincidence), a town near Cincinnati,” Stack’s Bowers Galleries wrote. “The two men escaped the jail soon thereafter, and just one of them was recaptured a few days later.”

The medal was never recovered.

Neville later convinced Congress to have the gold medal replaced, and in 1836, Congress authorized a replacement medal – just one to be struck in gold. It was struck in 1839 in Philadelphia and presented in 1841 to Morgan Neville’s son.

It remained in the family until around 1885, and at some point, was acquired by famed financier and banker J.P. Morgan, who incorrectly believed he was related to Daniel Morgan, Kraljevich said.

The medal then disappeared from view, and was thought to have been lost or melted.

Only in recent months did it reappear in its original United States Mint case of issue – red leather with crushed purple velvet interior, tooled in gilt and blind – when consigned anonymously to the auction house, Kraljevich said.

The entire spring auction will be available for viewing and bidding at StacksBowers.com.