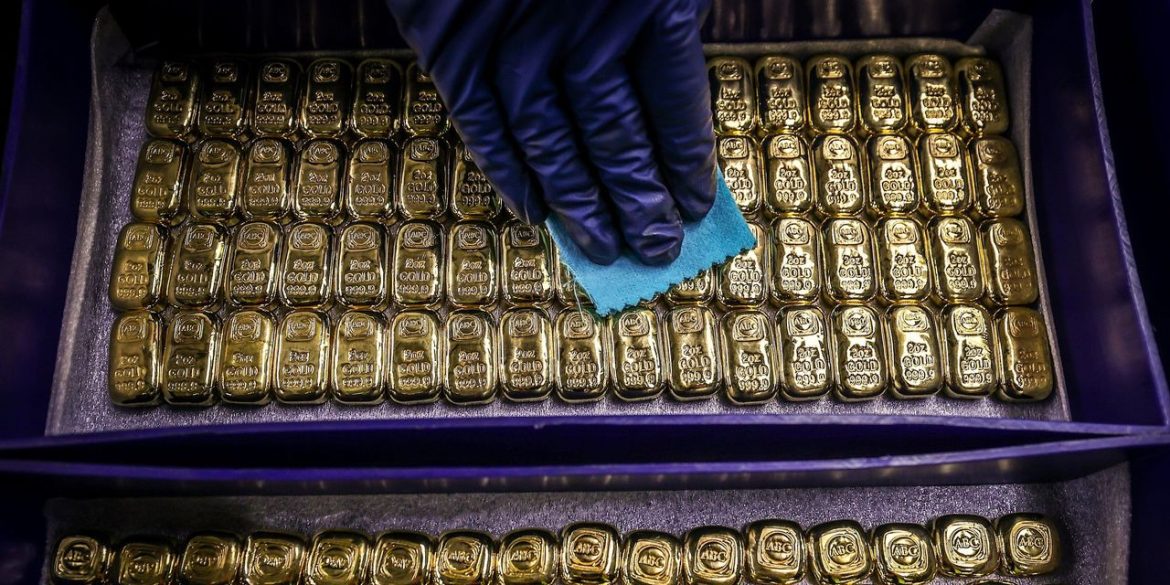 Gold prices fell on Monday to mark their lowest settlement in more than nine months, after clinching a fourth consecutive weekly decline as the strong dollar continued to weigh on the yellow metal.

Futures prices for gold had settled higher on Thursday and Friday following a seven-session losing streak that ended Wednesday, when prices for the most-active contract also marked their lowest finish since September 2021.

What analysts are saying

Most of gold’s losses since it reached its 2022 peak north of $2,000 per ounce has been the result of the strengthening dollar, and rising Treasury yields, which have made the shiny metal less attractive to investors by comparison.

have picked up over the past few days, after coming off their highs of the year reached in mid-June. Meanwhile, thanks largely to weakness in the euro
EURUSD,
,
the ICE U.S. Dollar Index
DXY,
,
a measure of the dollar’s strength against a basket of rival currencies, has reached a new 20-year high around 108.

“The precious metal’s price action is very much driven by the dollar index, which is holding on to its strength,” said Naeem Aslam, chief market analyst at AvaTrade, in a note. The U.S. nonfarm payrolls data released last Friday provided support for the Federal Reserve’s hawkish monetary policy, so “it is highly likely that the next interest rate [hike] will be 75 basis points, and this means that the dollar will pick more strength, and the gold price is likely to lose more shine.”

Traders eagerly await U.S. economic data this week, with the consumer-price index data due Wednesday and producer-price index out Thursday.

“Inflation is playing tug of war with gold and the precious metal is trying to hold the line,” said Edward Moya, senior market analyst at Oanda, in a market update.

“ “With Wall Street focused on if the Fed will send this economy into a recession, king dollar will likely remain the trade and that is a difficult environment for gold.”  ”

“A hot inflation report on Wednesday will cement aggressive Fed rate hike expectations for later this month and drive up expectations for September’s meeting,” he said. “With Wall Street focused on if the Fed will send this economy into a recession, king dollar will likely remain the trade and that is a difficult environment for gold.”