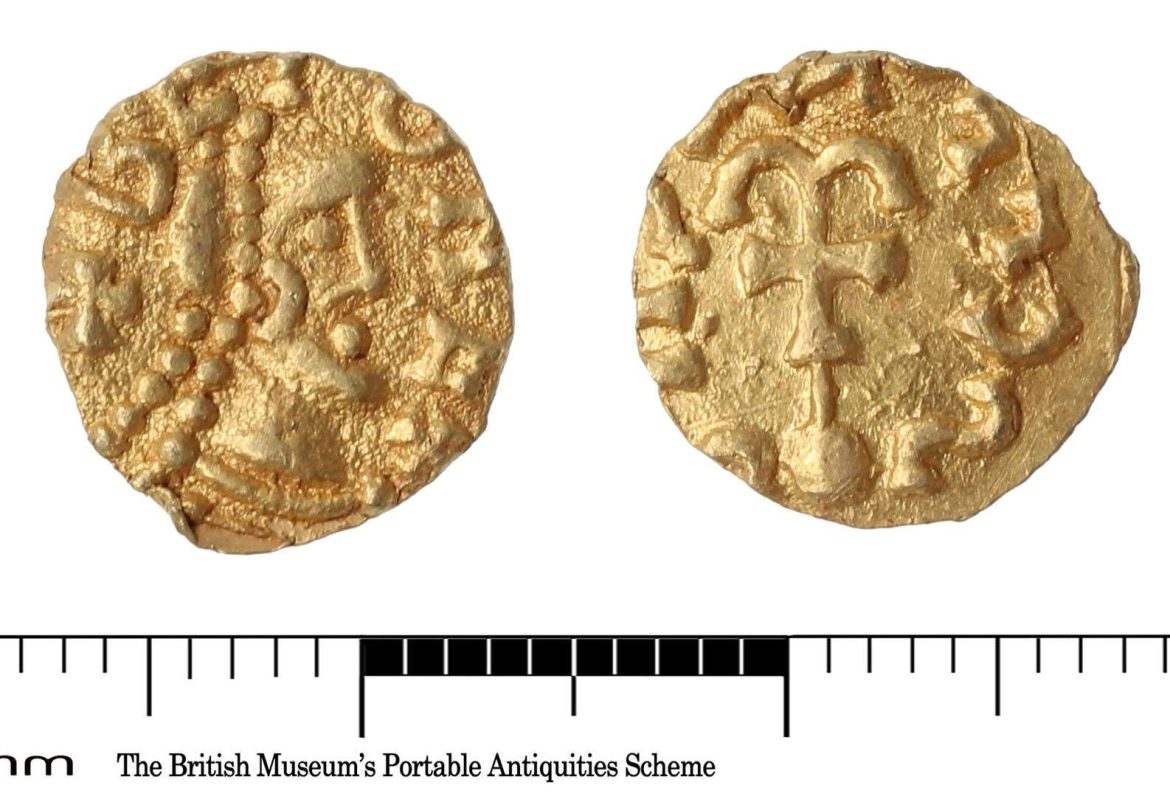 Four ancient gold coins found in a field near East Peckham could be worth more than £10,000 – but experts believe the site’s real treasure could be a couple of nondescript lead weights.

Discovered by Tonbridge metal detectorist David Callow, the coins and weights were the subject of an inquest held on Wednesday at County Hall, where coroner Alan Blunsdon declared the find officially as “treasure.”

Last year David spoke of the thrill at striking gold on the site – the precise location of which has been kept secret – but he says the real value comes from revealing its potential historic significance.

That said, he’s still keen to hear back from the British Museum – where a Treasure Valuation Committee is now due to determine the financial value of the horde.

“If they were going to auction, I think three of them could exceed £10,000,” he said, speaking after the inquest, “but I wouldn’t like to guess what value they’ll come up with.

“At an auction it depends on who’s in the room on a certain day.

“I was expecting it to be declared treasure but I’m pleased it has been. To me it’s all about the history – that’s the thing that’s most important thing.”

Although each of the coins has different origins, they all date to the 6th and 7th Century, a notoriously murky period of history often referred to as the Dark Ages, when European nations were beginning to form in the wake of the Roman Empire.

In Kent and most of Southern Britain, it was the Saxons who were beginning to forge kingdoms that would eventually evolve into England – but at least two of the coins found in this Saxon horde were actually from France, where the Merovingian dynasty had emerged as the rulers of the Franks.

Reading his report to the inquest, Kent County Council finds liaison officer, Jo Ahmet, identified two of the coins as ‘early-medieval Merovingian gold tremissis’ from around AD590-670, both minted in France – one in Senlis, and the other in St Denis.

He said the third coin, another early-medieval gold tremissis known as a ‘pale shilling’ of the “Two Emperors” type was from a later period, circa AD650-70, and likely to have been minted in either East Anglia or Kent.

The fourth, thought to date back to AD590-670, was more mysterious, of an “uncertain” origin and his report added: “The lack of inscription and relatively crude design also have some resemblance to some of the anonymous issues in the Crondall hoard, which contains a mixture of Anglo-Saxon, Frankish and Frisian coins, and it is possible that this is an Anglo-Saxon or Frisian coin derived from a Frankish prototype, rather than an official Frankish issue.”

The fact that different coins from different kingdoms had ended up in the same small horde, was not deemed to be unusual – as the economy of the 7thC was a bullion-based system, with value determined by weight of precious metal, rather than the ‘face value’ of a coin.

But that fact makes the presence of lead weights important, especially as the weights found were within 0.03 grams of the weight of the other coins, all of which weigh roughly 1.3 grams.

Jo believed such weights were being used to assess the value of coins – but actually finding them alongside coins was extremely rare.

Coroner Alan Blunsdon said the finds and subsequent report were “fascinating”, and concluded: “I have no hesitation in declaring the finds we have been talking about in this inquest are treasure.”

Speaking after the inquest Jo said the gold tremissis were “very rare” but added: “The pieces of lead are a unique find. Having the evidence that these are linked to the coins, and possibly produced to weigh against the coins, is unique.

“Having that direct association between the coins and the weights makes this a unique find, possibly unique in Northern Europe and certainly in Britain.”

But he said further finds would be necessary to begin to make assumptions on the historical significance of the location.

“The lead objects show it maybe belonged to someone who’s active in the economy,” he added. “There’s always potential that there’s more buried there, but we would expect other finds.

“The potential is we are looking at a significant site. If you’re looking at a site owned by an important lord, you’d need to start pulling out more early Saxon coins and things like brooches. At the moment we’ve got four gold coins and some bits of lead, so we can’t make assumptions, but this is why I’m keen to keep working with David to see if we can work out what was going on here.”