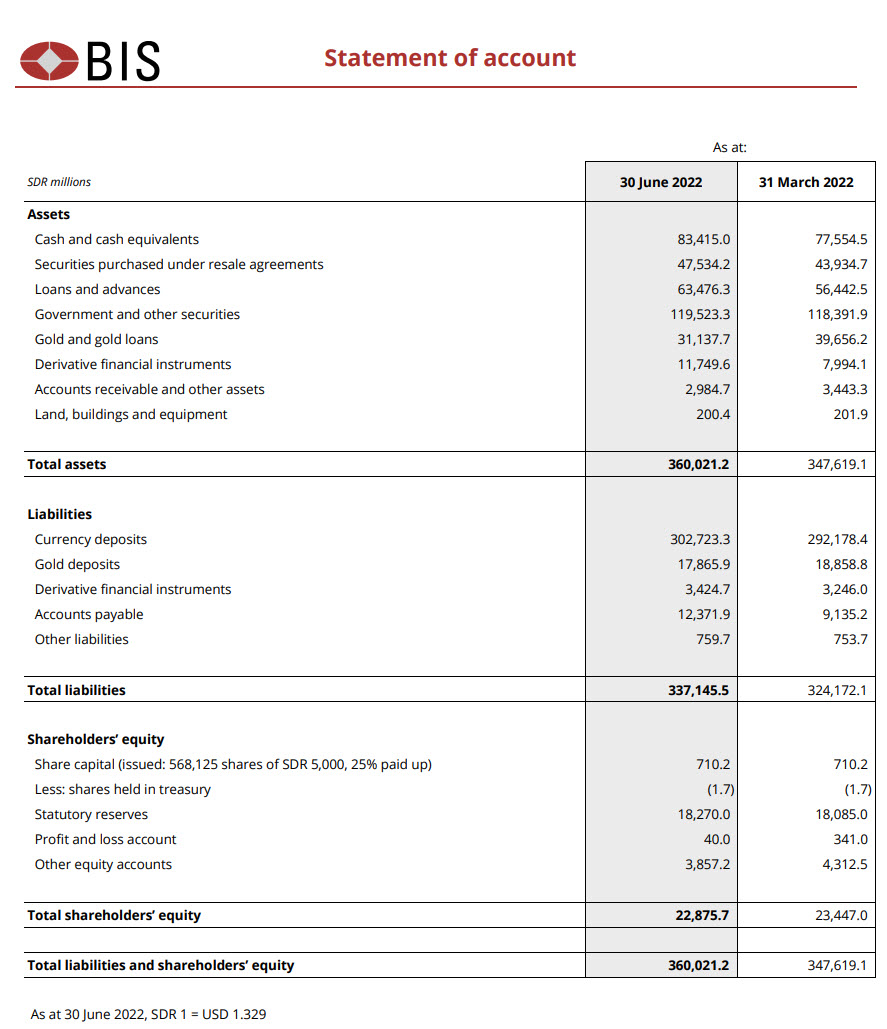 Gold swaps undertaken by the Bank for International Settlements, the major gold broker for central banks, fell substantially again in June, this time by 68 tonnes, bringing the bank’s total swaps down to 202 tonnes from the 501 tonnes on the bank’s books in January, a decline of nearly 60% in six months.

The bank’s June statement of account is posted here:

The June total of swaps is the bank’s lowest since October 2019.

Again it is evident that the BIS remains an active trader of large volumes of gold swaps on a regular basis, and the recent data suggests that a downward trend in its swaps is continuing. If the current rate of decline is maintained, the BIS may be reporting zero gold swaps later this year.

The trend may indicate a response by the BIS and bullion banks to implementation of “Basel III” regulations, which make the unallocated gold business more burdensome for bullion banks.

The BIS rarely comments publicly on its gold activities, but its first use of gold swaps was considered important enough to cause the bank to give some background information to the Financial Times for an article published July 29, 2010, coinciding with publication of the bank’s 2009-10 annual report.

The gold banking activities of the BIS have been a regular part of the services it offers to central banks since the establishment of the bank 90 years ago. The first annual report of the BIS explains these activities in some detail:

A June 2008 presentation made by the BIS to potential central bank members at its headquarters in Basel, Switzerland, noted that the bank’s services to its members include secret interventions in the gold and foreign exchange markets:

The use of gold swaps to take gold held by commercial banks and then deposit it in gold sight accounts held in the name of the BIS at major central banks doesn’t appear ever to have been as large a part of the BIS’ gold banking business as it has been in recent years.

As of March 31, 2010, excluding gold owned by the BIS, there were 1,706 tonnes held in gold sight accounts at major central banks in the name of the BIS, of which 346 tonnes or 20% were sourced from gold swaps from commercial banks.

The BIS now operates a much smaller gold banking business, with an estimated 611 tonnes of gold deposited in gold sight accounts as of 30 June. (This excludes 102 tonnes of the gold owned by the BIS itself.)

The present-day role of gold swaps in this smaller business is reducing sharply as the volume of swaps falls. In June the gold held in sight accounts on behalf of the BIS was about 33% provided by gold swaps. In May, excluding the 102 tonnes of gold owned by the BIS, some 39% of the gold held in sight accounts at major central banks on behalf of the BIS came from gold swaps instead of from other central banks.

If the BIS was adopting the degree of disclosure made by publicly held companies, such as commercial banks, some explanation of these changes probably would have been required by the accounting regulators. This irony may not be lost on those dealing with regulatory activities at the BIS. Presumably the shrinkage of the BIS’ gold banking business shows that even central banks now prefer to hold their own gold or hold it in earmarked form — that is, as allocated gold.

A review of Table B below highlights recent BIS activity with gold swaps, and despite the recent declines, the latest position estimated from the BIS monthly statements remains large and the volume of trades is significant.

No explanation for this continuing use of swaps has been published by the BIS. Indeed, no comment on the bank’s use of gold swaps has been offered since 2010.

This gold is supplied by bullion banks via the swaps to the BIS. The gold is then deposited in BIS gold sight accounts (unallocated gold accounts) at major central banks such as the Federal Reserve.

The reasons for this activity have never been fully explained by the BIS and various conjectures have been made as to why the BIS is facilitating it. One conjecture is that the swaps are a mechanism for gold secretly supplied by central banks to cover shortfalls in the gold markets to be returned to the central banks. The use of the BIS to facilitate this trade suggests of a desire to conceal the rationale for the transactions.

As can be seen in Table A below, the BIS has used gold swaps extensively since its financial year 2009-10. No use of swaps is reported in the bank’s annual reports for at least 10 years prior to the year ended March 2010.

The February 2021 estimate of the bank’s gold swaps (552 tonnes) is higher than any level of swaps reported by the BIS at its March year-end since March 2010. The swaps reported at March 2021 are at the highest year-end level reported, as is clear from Table A.

The table below reports the estimated swap levels since August 2018. It can be seen that the BIS is actively involved in trading gold swaps and other gold derivatives with changes from month to month reported in excess of 100 tonnes in this period.

± The estimate originally reported by GATA was 487 tonnes, but the BIS annual report states 490 tonnes, It is believed that slightly different gold prices account for the difference.

* The estimate originally reported by GATA was 332 tonnes, but the BIS annual report states 326 tonnes. It is believed that slightly different gold prices account for the difference.

GATA uses gold prices quoted by USAGold.com to estimate the level of gold swaps held by the BIS at month-ends.

As noted already, the BIS in recent times has refused to explain its activities in the gold market, nor for whom the bank is acting:

Despite this reticence the BIS is almost certainly acting on behalf of central banks in taking out these swaps, as they are the BIS’ owners and control its Board of Directors.

This refusal to explain prompts some observers to believe that the BIS acts as an agent for central banks intervening surreptitiously in the gold and currency markets, providing those central banks with access to gold as well as protection from exposure of their interventions.

This disclosure seems a little economic with the truth as the BIS has no gold storage facilities of its own. Gold held by the BIS on behalf of central banks is either deposited into a BIS gold sight (unallocated) account or a BIS earmarked (allocated) gold account and deposited normally with one of the central banks based at a major gold trading center, such as the Federal Reserve in New York.

Since Manly shows that the Bank of Portugal is focused on earning income from its gold, it seems highly likely that this gold is held in a BIS sight account, though its ultimate location is unclear.

It is possible that the swaps provide a mechanism for bullion banks to return gold originally lent to them by central banks to cover bullion bank shortfalls of gold. Some commentators have suggested that a portion of the gold held by exchange-traded funds and managed by bullion banks is sourced directly from central banks.

Robert Lambourne is a retired business executive in the United Kingdom who consults with GATA about the involvement of the Bank for International Settlements in the gold market.