A number of fascinating artifacts from the wrecks of two ships that foundered off the coast of Caesarea in the Roman and Mamluk periods (some 1700 and 600 years ago) have been discovered in recent months near Caesarea, during an underwater survey conducted by the Marine Archaeology Unit of the Israel Antiquities Authority. The ships’ cargoes and the remains of their wrecked hulls were found scattered in shallow water at a depth of about 4 m, scattered on the sea floor. 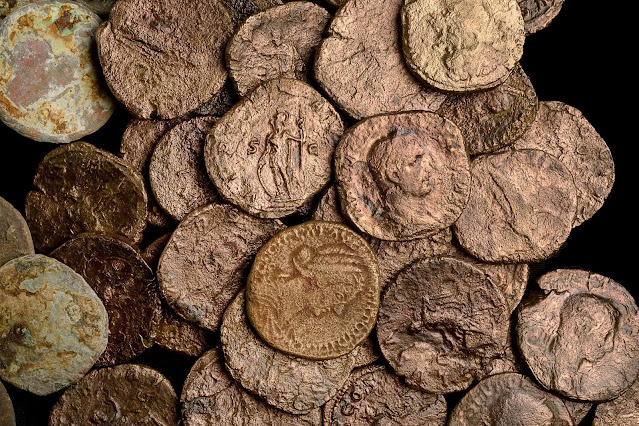 According to Jacob Sharvit and Dror Planer of the Israel Antiquities Authority’s Marine Archaeology Unit, “The ships were probably anchored nearby and were wrecked by a storm. They may have been anchored offshore after getting into difficulty, or fearing stormy weather, because sailors know well that mooring in shallow, open water outside of a port is dangerous and prone to disaster.”

The marine treasure includes hundreds of silver and bronze Roman coins from the mid-third century CE and a large hoard of silver coins from the Mamluk period (fourteenth century; about 560 coins, including a large amount of smaller ribbon cut like pieces); a bronze figurine in the form of an eagle, symbolizing Roman rule; a figurine of a Roman pantomimus in a comic mask; numerous bronze bells intended among other things to ward off evil spirits; and pottery vessels.

Multiple metal items from the hull of a wooden ship were also discovered, including dozens of large bronze nails, lead pipes from a bilge pump, and a large iron anchor broken in pieces-attesting to the force it withstood until it finally snapped, probably in the storm. 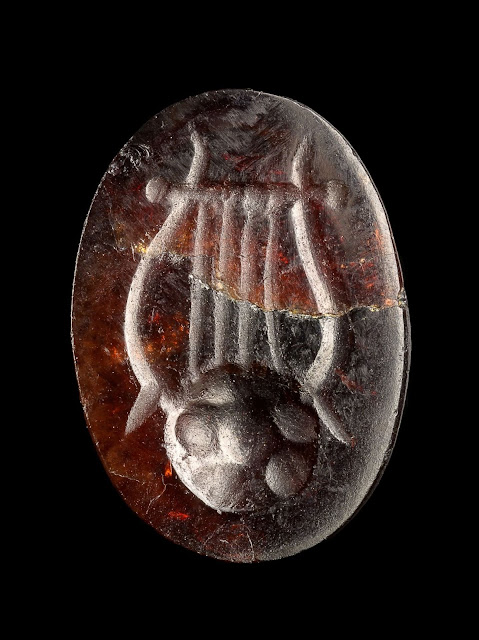 A red gemma engraved with a lyre discovered off the coast of Caesarea
[Credit: Yaniv Berman, Israel Antiquities Authority]

The underwater remains include rare personal effects of the shipwreck victims. Among these were a beautiful red gemstone for setting in a ‘gemma’ ring; the carving of the gemstone shows a lyre. In Jewish tradition, the lyre it is called Kinor David (‘David’s harp’). According to 1 Samuel 16:23, King David played his harp for Saul (“Whenever the spirit from God came on Saul, David would take up his harp and play. Then relief would come to Saul; he would feel better, and the evil spirit would leave him”). The biblical kinor is generally equated with the instrument known as ‘Apollo’s Lyre’ in Greek mythology. In the Greek myth, the infant Hermes made the instrument, the lyre, out of the shell of a tortoise on the morning of his birth. In exchange for the instrument, the music lover Apollo agreed to make Hermes and his mother gods. 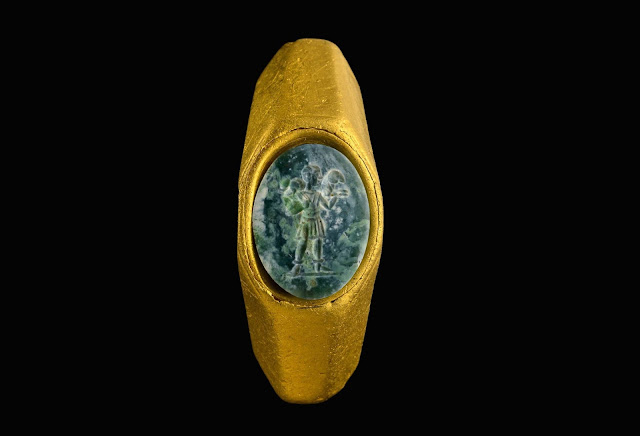 Another exquisite and rare find is a thick, octagonal gold ring set with a green gemstone carved with the figure of a young shepherd boy dressed in a tunic and bearing a ram or a sheep on his shoulders. The image, of the ‘Good Shepherd’, is one of the earliest and oldest images used in Christianity for symbolizing Jesus; it represents Jesus as humanity’s compassionate shepherd, extending his benevolence to his flock of believers and all mankind. This unique gold ring bearing the figure of the ‘Good Shepherd’ gives us, possibly, an indication of its owner, an early Christian. 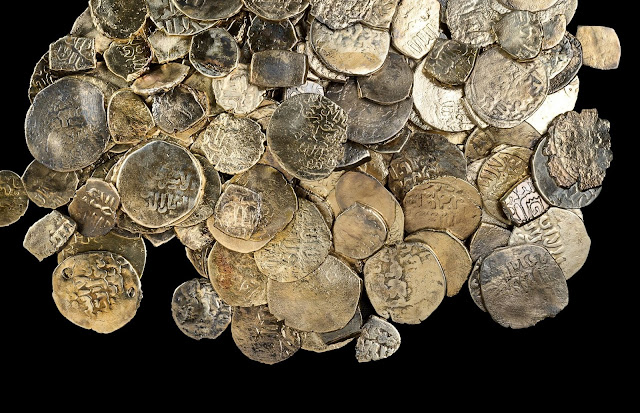 A hoard of coins from the Mamluk period recently discovered in a shipwreck off the coast of Caesarea [Credit: Dafna Gazit, Israel Antiquities Authority]

The ring was discovered near the port of Caesarea, a site of great significance in Christian tradition. Caesarea was one of the earliest centers of Christianity and housed one of the first Christian communities. At first, only Jews belonged to this community. It was here, that the apostle Peter baptized the Roman centurion Cornelius in Caesarea (Acts 10:10). “This was the first instance of a non-Jew being accepted into the Christian community,” says Sharvit. “From here, the Christian religion began to be disseminated across the world.”

According to Eli Eskozido, Director of the Israel Antiquities Authority, “Israel’s coasts are rich in sites and finds that are immensely important national and international cultural heritage assets. They are extremely vulnerable, which is why the Israel Antiquities Authority conducts underwater surveys to locate, monitor and salvage any antiquities. There are many kinds of sporting activities along Israel’s shores, including diving, snorkeling, open water swimming and sailing, during which antiquities are occasionally discovered. We appeal to divers: if you come across an ancient find, take a note of its underwater location, leave it in the sea and report it to us immediately. The discovery and documentation of artifacts at their original find spot has tremendous archaeological importance and sometimes even a small find leads to a great discovery.”