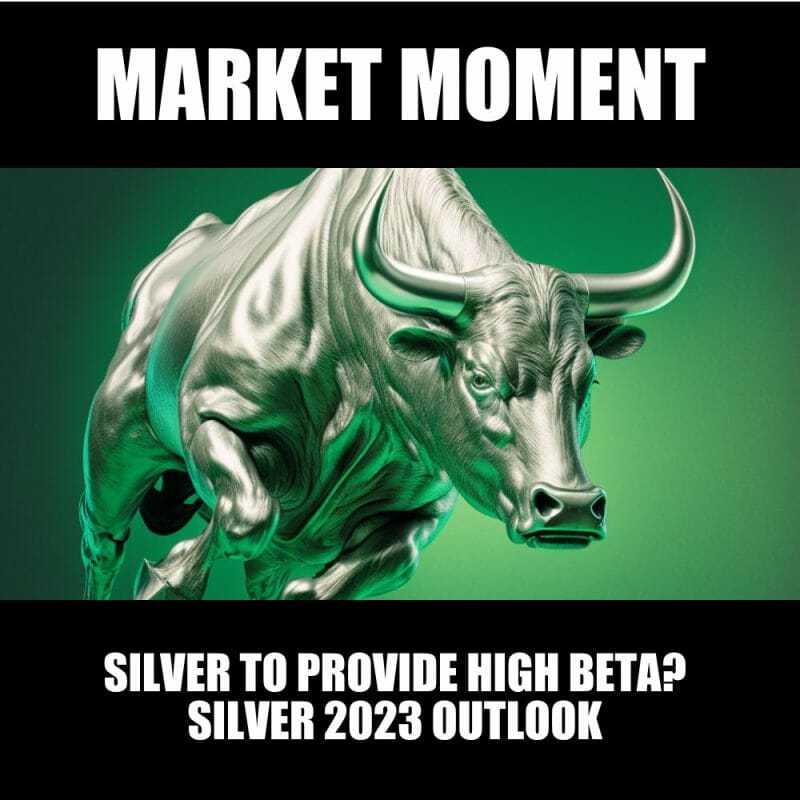 Precious metals are kicking off 2023 on a positive note. Very positive for gold. Readers can find my 2023 gold forecast here. Silver follows the price action of gold. If you lay out the chart of silver vs gold (the precious monetary metal) and copper (the base industrial metal), silver correlates more with gold. However, silver’s primary use is for industrial purposes. Silver bulls love the metal because you get the best of both worlds. You get an investment which follows the monetary metal, but also has an industrial usage.

2023 is setting up to be a great year for precious metals and commodities.

Inflation currently is the big theme and there is a lot of debate on whether the Fed and other central banks will be able to tame inflation. Yesterday, Dr. Michael Burry came out and said that the Fed will cut rates due to recession in 2023, but government stimulus will cause inflation to rise, giving us more highs in inflation in 2023. Interestingly enough, I wrote about this in my major bond market 2023 outlook.

If inflation remains high, and real rates remain in the negative (rate of inflation-interest rate) this is a very bullish sign for gold, silver and other commodities. Precious metals do well in a negative real interest rate period as they compete with bonds and do not yield anything.

Many analysts see a Fed Pivot as being positive for precious metals as interest rates would drop lower. Precious metals could be rising already pricing in this eventual pivot.

“Silver should benefit from the end of the Fed’s interest rate hikes and the speculation on interest rate cuts that will start thereafter. The expected economic recovery following the end of the recession should additionally benefit silver as a precious metal with a high industrial use. With the easing of corona restrictions in China, silver demand should receive a further boost, as China is the largest consumer of silver,” said Commerzbank analyst Carsten Fritsch.

In my gold article I wrote about the confidence crisis, and how gold does extremely well in one. If we do see a period where inflation remains high and the Fed is forced to cut interest rates which leads to higher inflation… I think that would meet the criteria of a confidence crisis. This idea of precious metals being a safe haven asset is extremely relevant when you consider other geopolitical aspects that could ignite in 2023.

Silver bulls get excited because the metal is volatile. When gold moves, silver moves like gold but on steroids. If gold is expected to do well in 2023, then silver could very well outperform gold in 2023 being a high beta play.

Perhaps the most exciting aspect for silver bulls is the supply and demand macro set up.

Demand for silver is rising, and the Silver Institute said silver demand set a record for 2022 with an increase in demand for  industrial demand, jewelry and silverware offtake and physical investment. 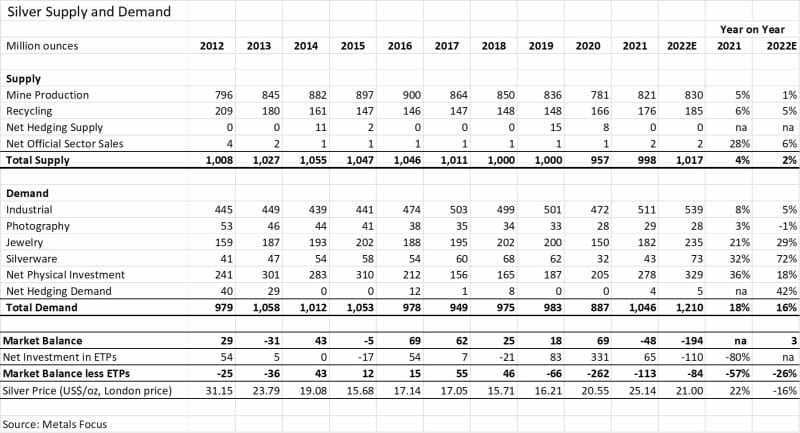 Here are some key points from The Silver Institute:

The outlook for 2023 sees many of these factors remaining in place. A recession could dampen silver’s industrial demand, but many analysts believe it will not be enough to make silver a recessionary casualty.

“Industrial demand should continue to benefit from electrification of the vehicle fleet, 5G technology, and the government-driven rollout of green infrastructure such as photovoltaics. Physical investment demand should be buoyed unabated by fears of high inflation,” said Fritsch.

“We are seeing a great deal of investments into PV and electrification. That is ultimately good for silver. Meanwhile, the U.S. economy is bubbling along with some decent growth rates, which helps lift up conventional applications for silver in electronics and chemical applications.”

How about investment demand? Silver being volatile means it sees a lack of interest from institutional investors. But what if all the things mentioned in this article come true. Silver would look cheap at these levels, and its move would bring high beta to portfolio’s. I bring institutional money for one main reason: the silver market is tiny when you compare it to gold. It is about 1/10th of the size.

If institutional money decides to pile into silver, we would see a huge move due to the small market size… and subsequently, see a larger percentage gain. 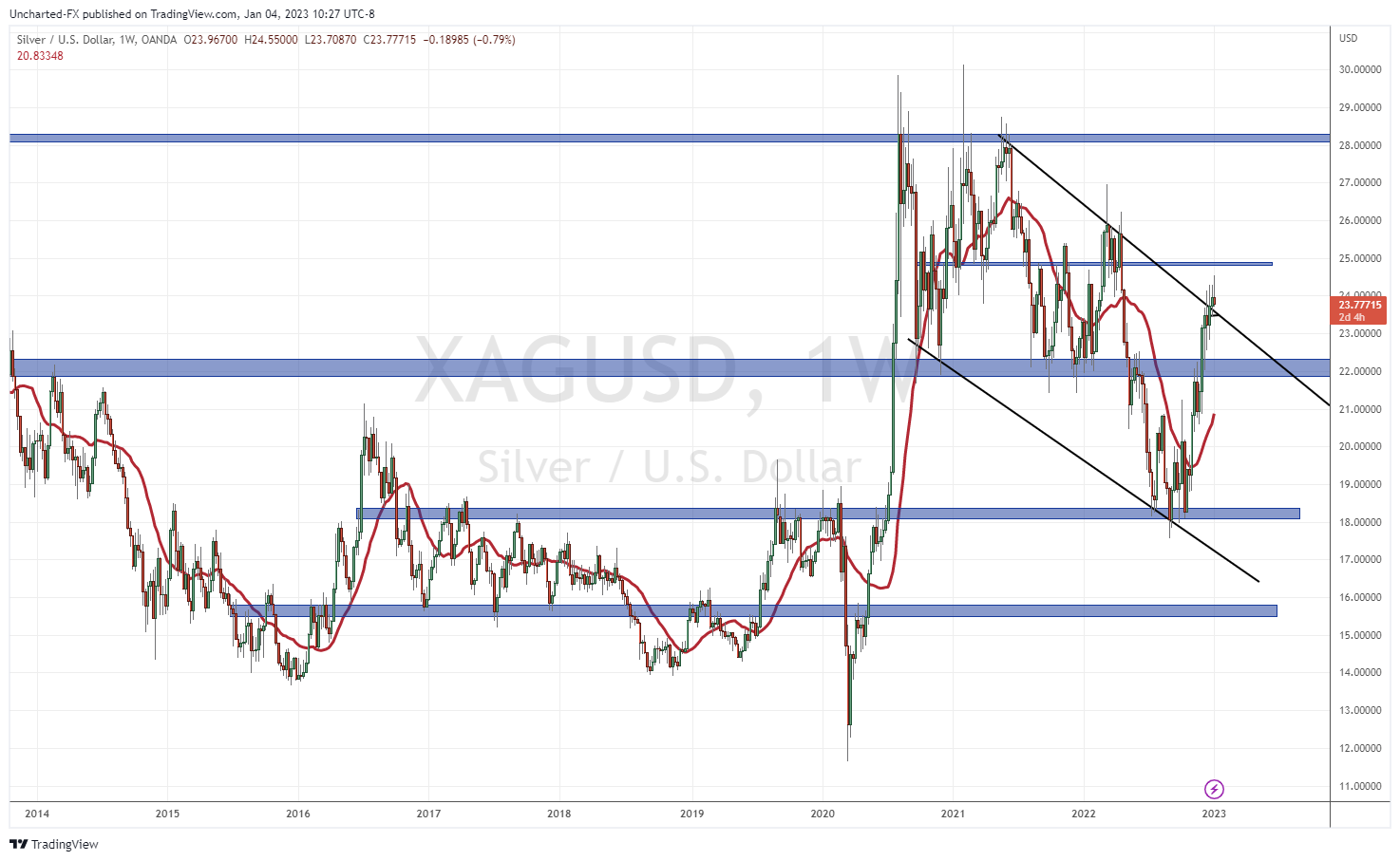 When it comes to price targets for this year, analysts vary. There are some saying silver could hit record highs in a commodity super cycle this year. Others are targeting $28-$30 an ounce, while some see $25 as the peak.

When I look at the weekly chart which I have posted above, according to market structure theory, we should see a breakout above recent highs this year. I am more in line with $30 and higher price targets.

The big technical move happened when silver tested and bounced from a major key support zone at $18. Going forward in 2023, $18 will remain key support, and if that breaks, silver will fall to the $15 zone.

But before we can talk about $18 support, there is another major support level at $22 which is current major support. I can see pullbacks in the medium term take us down to this level.

Finally, I want to highlight the channel lines I have drawn. We do have a flag pattern, and silver did actually close and break above the upper portion of this trendline just last week. This has the potential to be a major technical breakout but we will have to see if momentum plays out in coming days and weeks. 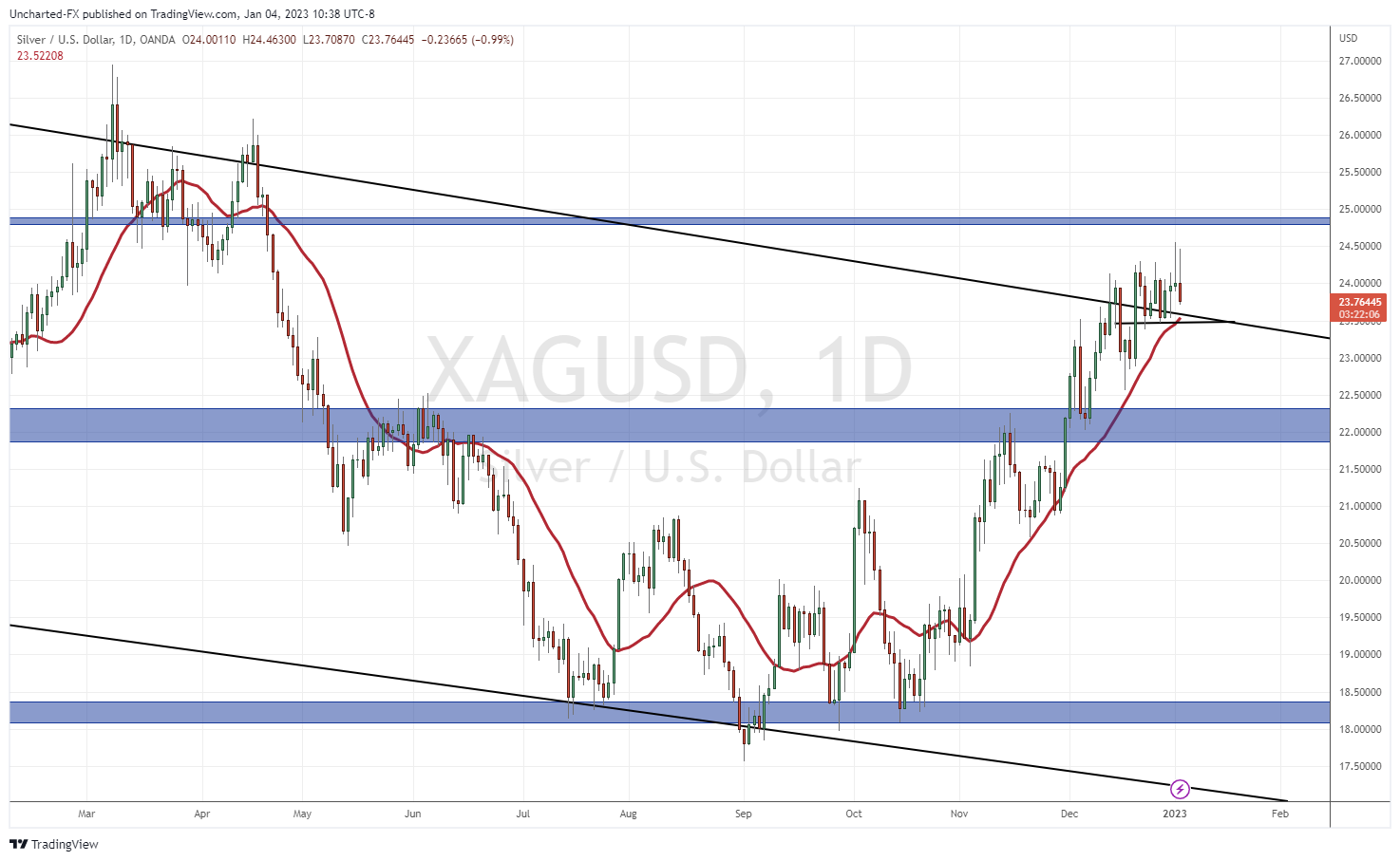 As gold has been breaking out in recent days, silver has just been ranging. For silver bulls, the $25 level is a major psychological resistance level. We are seeing some sellers step in every time we get close to $25. From a trading perspective, I believe short sellers are entering and placing stops just above $25. If silver can break and close above $25, then the first quarter of 2023 will be extremely positive for silver.